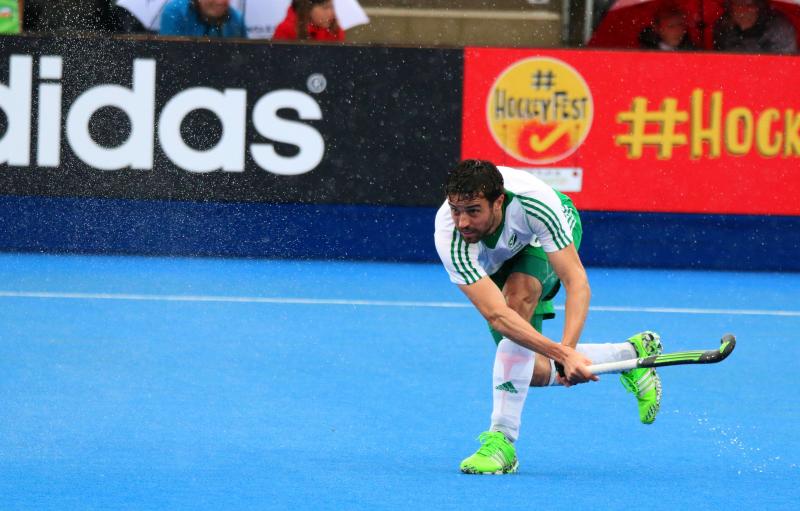 Cargo made his debut in the 2009 Celtic Cup scoring on debut as Ireland defeated France 3-1 in Edinburgh. 11 years, 195 matches and 28 international goals later he has decided to call time on his international career.

Performance Director Adam Grainger congratulated Chris on his career on behalf of Hockey Ireland, saying “Congratulations on your Hockey Ireland playing career, you have a lot to be proud of. We have no doubt you’ll be successful in everything you undertake off the pitch.

Please do keep in touch with Hockey Ireland, the experiences retired internationals can put back into our system is invaluable.”

Chris came through the ranks of Bangor Grammar and played for the seaside club whilst also having played in England and Europe during his illustrious career.

He was part of the Irish side who made history winning the first senior European medal when they defeated England 4-2 in London in 2015 to win bronze at the Europeans and then made history again to qualify for the Rio Olympics in 2016. Chris played all 5 matches and unfortunately the side were not able to repeat the feat when the lost on penalties to Canada in their bid to qualify for Tokyo.

In all he played in 3 European A division championships alongside the Olympic games winning 77 of the 195 matches he played for Ireland. He finishes his Irish career 8th on the all-time caps list, with 28 goals and captaining the team twice against Pakistan in Lisburn in 2017.

“I have loved wearing the green shirt for 10 years in countries all over the world and making history with this group,” said Cargo.

“I would particularly like to thank Paul Revington for giving me my first opportunity to wear a green shirt. I had given up on that dream so I will always be truly grateful to him for giving me that chance and changing my life. He made me, and the whole group, believe that we could make history and instilled in us a huge drive and determination. To Ned, for galvanising the team after the disappointment of 2012, you pushed us on again through our “No excuses” mantra. Finally, to Tum for coming in and making this group enjoy their hockey again.

I have been very lucky to have been playing in an Irish shirt during a period when, in my opinion, some of the best players in Irish history were playing alongside me. To all the lads I have shared a pitch with over the years; Thanks! It was an amazing journey and I was lucky enough to forge some enduring friendships, whilst making history with this team and having a great laugh along the way. There have been many low points on the journey, but they make the successes so much sweeter.

To my parents, thank you for all your support along the way and for trusting and backing me in all the decisions I have made. To Sarah, my fiancée, thank you for being so understanding and allowing me to chase my dreams with unconditional support. Furthermore, thank you to all the families in Dublin, especially the Loughreys, who have welcomed me into their homes.

I look forward to wearing my green shirt as a supporter of Irish Hockey in future years. Irish hockey is in rude health with the ladies representing us in Tokyo next summer and I believe that the correct support for both teams will mean that we will see both in Paris and for many more Olympics to come.”