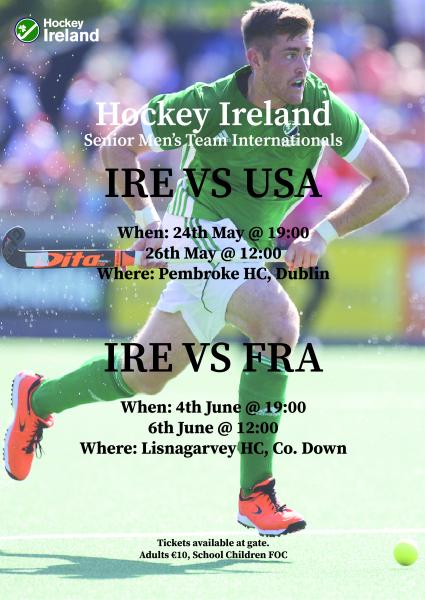 Ireland Senior Men’s team will take on USA and France over a number of matches between the end of May and beginning of June.

The Men’s team will play the USA on

They will play France on

These will be the last international matches the Men’s team will play prior to their FIH Series Finals which take place in Le Touquet between the 15th and 23rd of June. Speaking on the games, Hockey Ireland Performance Director, Adam Grainger, said, “Hosting international matches in Ireland has become increasingly difficult recently, and Hockey Ireland Senior Men are therefore delighted to play both USA and France in Dublin and Belfast respectively. As our Senior Men return home from their respective clubs, these matches will provide much needed preparation for June’s World Series in Le Touquet. We encourage the hockey community to come out and support the players for what should be an exciting and rewarding summer of hockey”.

Tickets will be available at the gate for each of these matches.

More information on the Men’s FIH Series Finals in Le Touquet can be found at: http://ticketingfihseriesfinal.fr/en/