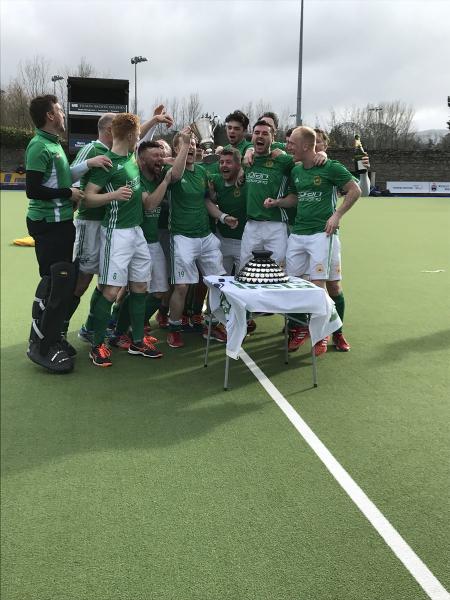 Glenanne produced an excellent first half performance to win the men’s Irish Junior Cup for the third time, ending a 23-year wait to win back the trophy.

They built a 3-0 lead thanks to goals from Enda Tucker, David Keogh and Daryl Carey before Pembroke fought back with Scott Furlong netting twice but they were left to rue not making more from their series of 11 corners.

The Glens were up and running almost immediately with David Keogh bearing down on goal inside the first 30 seconds, drawing Simon Thornton into a good save. They also had three corners in the opening four minutes.

Pembroke took their time to find their form but showed some lovely touches on the break with Patrick Good, Geoff Garrett and Sam McElroy combining well while Cian Murphy’s shot hit a foot to start their run of corners.

James Murtagh was equal to Furlong’s first drag while Wesley Brownlow was shut down on the switch.

But just as they were finding their feet, Glenanne struck with Joe Brennan picking a lovely line of pass and Enda Tucker got the necessary redirection to open the scoring.

Another two Pembroke corners were closed out before another counter strike caught Pembroke cold as Thornton was deemed to have taken man rather than ball from a long ball. It led to a stroke that David Keogh slotted for 2-0.

Both sides had further corner chances in the last 20 seconds of the half but neither were converted.

Pembroke started the second half the brighter with Ben Schutte drawing another smart stop from Murtagh’s chest before Garrett fired into the side-netting.

They fell further behind in the 47th minute from a classy move, the pacy Adam Clayton getting down the left baseline who flipped the ball back into the path of Daryl Carey who just got enough on the ball to clear the line.

From there on, it was a case of Pembroke winning corners. They eventually converted from their ninth set piece with Furlong picking out the bottom corner with 10 minutes to go.

A minute later, Stu Ronan saved off the line at chest-height, his touch slicing the ball over the bar. Furlong had another go with three minutes left, this time walking forward while Glenanne reacted slowly to the injection, but shot wide.

He did get another into the corner in the last minute but it was too late to change the outcome.